Wednesday April 6, 2022 at 4.30pm – put the date in your diary. Make a cuppa and sign in for a joint webinar with Faith in Older People and the Pioneer of Anna Chaplaincy, Debbie Thrower.

Sign up for your free place via Eventbrite HERE 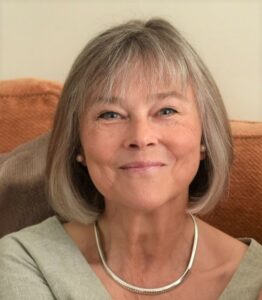 Looking back on growth since Debbie became the very first Anna Chaplain, the former broadcaster explains why this approach to supporting people in later life is gaining momentum as it reaches Scotland.

While we’re living longer, generally, more of us than ever are living alone – 3.8 million men and women in the UK over the age of 65 live alone, 58% of whom are over 75.*

What many people on their own long for is someone to talk to – someone who’ll look as if they are trying to understand them.

Since 2014 the movement has grown from a single chaplain in a small market town in Hampshire, to a national network of chaplains in all sorts of towns and villages that’s more than 200 strong. The name is inspired by the widow Anna in Luke’s gospel, who was 84 years old, we’re told, and full of faith and hope.

It is all still a drop in the ocean in terms of need, but the pandemic has certainly accelerated the number of new recruits. One of those is now ministering in South Lanarkshire, and there are other network members in Nairn and Orkney.

Anna Chaplains help those who feel isolated navigate the choppy waters of old age. They serve people of all faiths and none, in residential care and private homes. The range of support is wide, from ‘just talking’ to being advocates for those who are alone or feel disempowered.

There are more than two hundred in the network, each seeing an average of 56 older people a month.** Through conversation, spending time getting to know individuals, they help engender fresh perspectives on challenging situations. Their greatest impact is to help people feel ‘loved and cared about’.

People often ask me if I miss television having worked for both BBC and ITV as a reporter/presenter and national newsreader. I can honestly say I don’t because this is such fascinating work, addressing a big societal problem, and we all have a vested interest in having someone to listen to us as we get older!

It seems unjust to me that many churches employ children’s workers or youth leaders – but how many have appointed people to minister specifically to the older people in their congregation and beyond?

Maggie Dodd is an Anna Chaplain in Hertfordshire. She explains how she wants to see more older people ‘cherished and supported within their church communities, and also beyond in the wider community.’

Many Anna Chaplains are voluntary, though Maggie’s is a paid post, thanks to two Methodist churches joining together to recruit an Anna Chaplain. ‘Often you have people who used to attend church’ says Maggie, ‘and they’ve become a little more frail and not able to attend or they’ve moved to a care home or sheltered housing, and they just lose touch with what’s going on. They’re not able to take themselves to church anymore.’

Last Christmas, she joined other chaplains in a project making stars to give as gifts to residents in care homes and to anyone they knew who was on their own. After seeing an inspirational post from Barrow-in-Furness Anna Chaplaincy about their star project, she says: ‘I asked churches in St Albans to knit, stitch, or decorate wooden stars to wrap and give to each care home resident in the city. I calculated there are 587 rooms in residential care homes in St Albans and so aimed for 600 or so, to cover all the stars I would need.

‘The churches were brilliant, 13 got involved, including the cathedral, the two Methodist churches, seven Church of England churches, one Baptist and two URC churches, as well as various Rainbow and Brownie units, and primary schools.’

‘We hit our target, and after several wrapping sessions at churches, I was able to deliver the stars to the twelve care homes. It’s been a great catalyst for conversation with the churches about Anna Chaplaincy and connecting with care homes in the city. It has worked really well here, and by the sounds of it the churches would like to try something similar again next year.’

Maggie is just one of dozens of men and women, lay or ordained, and some post retirement age themselves, who are being trained through our online courses. Why not explore whether this role might be for you too? www.annachaplaincy.org.uk

Anna Chaplaincy is part of Bible Reading Fellowship, BRF, whose vision to see an Anna Chaplain in every small and medium-sized community in the country, and for the Anna Chaplain name to become synonymous with spiritual care for older people.

** Anna Chaplaincy Impact Report 2021 ‘Where we are a decade on’ https://www.annachaplaincy.org.uk/impact-report-2021