During the last week in January I had the honour of working with three survivors at various holocaust memorial events in Edinburgh and Falkirk. The survivors were Janine Webber (Holocaust), Hasan Hasanovic (Srebenica) and Marie Jeanne Umutesi (Rwanda). These survivors had endured unimaginable suffering, had feared for their lives, and endured the killing of close loved ones. Murdered for no reason other than their ethnicity or religion. All survivors made a request to young people to stop ‘othering,’ to stop hating people because of the different groups they were perceived to belong to. The young people listened attentively and clearly empathised with the speakers, shown by the fact that you could have heard a pin drop in each room, and by the cues of students who surrounded the speakers to show their appreciation. The students left with a motivation to do what they could to prevent others around them in their schools and communities to become the victims of hate. 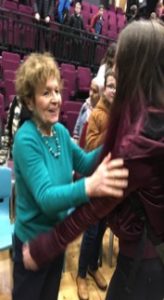 Above, Janine Webber met by a student at Broughton High School, Edinburgh 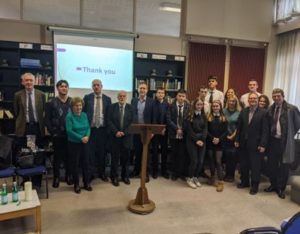 Above, students gather with speakers and guests at Trinity Academy, Edinburgh

When we listen closely to the experiences of others who have been the victims of hate crimes we too are motivated to try and prevent these crimes from occurring again. Unfortunately, there are those in our society who fail to listen to peoples direct experiences of hate crime, racism and discrimination, such as Islamophobia or anti-Semitism in their communities, parties and groups. They have a false idyllic image that somehow their context is immune to ‘hate.’

I remember a local councillor in Edinburgh stating that we did not need a hate crime transport charter as hate crimes did not occur on Edinburgh transport. Yet I had worked to design this charter after hearing directly of the harrowing experience of a person with learning disabilities subjected to a harrowing attack on a local bus. We were determined to try and make our local transport safe from hate. If you were to ever visit Rwanda, as I have done several times you would meet such a warm, loving and welcoming people that you would question how a genocide could take place in such a country.

The truth is that hate can take place in any country and society, and if the seeds of hate are allowed to be sown they can grow and spread like a dangerous virus. This is why I was deeply disturbed by instances that took place in Edinburgh recently. On January 23rd two Asian shop keepers were subjected to a racist assault by a gang of 20 armed with crow bars and kitchen knives. Only the week before vile anti-Semitic posters appeared on roads up and down the Royal Mile. All of this happening only days before we commemorated Holocaust Memorial Day, when we should be reflecting on the lessons of the past to ensure they do not occur again.

History has taught us that there are no easy or quick solutions to tackling hate crime or hate ideology. We have to listen to groups who are directly affected by hate crime and ask them how they feel hate crimes could both be prevented and how the process of reporting and responding to hate crimes could be improved.

At the Edinburgh Interfaith Association our primary concern is with how we tackle and prevent hate crimes directed against religious communities but we are concerned to stop hate crimes directed against people of all protected characteristics. For that reason, we have a designed a hate crime awareness course currently being piloted in schools around Edinburgh and Glasgow. It includes individual lesson plans, interactive PowerPoints, activities, discussion questions, printed and video case study material highlighting examples of different hate crimes and how people have been affected by them. It has a focus on religious hate crimes but includes hate crimes against all protected groups. It covers what is a hate crime? – hate speech vs freedom of speech – cyber hate and hate crime prevention

The course is designed for use in the RME curriculum (www.thegroundweshare.com/awareness-course), is easily adaptable in a youth setting, and has three aims:

We hope that all schools across Scotland will join others in running this course as part of their commitment to tackling hate and fostering welcoming inclusive learning communities.