Debbie Thrower invites greater participation in Scotland in Anna Chaplaincy for Older People. ‘It is gaining traction in many parts of the UK’, she writes, ‘as an effective way of supporting people post retirement and benefitting from the gifts and skills of people in later life. It is time to see more such work in Scotland’.

What is Anna Chaplaincy?

We live in a world of accelerating demographic change. It is good news we are living longer but with longevity come challenges. Anna Chaplaincy for Older People is a tried-and-tested approach to ministry among people in their later years.

More and more of those in the older age category themselves are sensing a calling to this ministry of offering spiritual care. Church leaders are finding out how Anna Chaplaincy can shape their support for this growing cohort of people in the ‘third and fourth ages’ of life.

Anna Chaplains are good listeners showing how to be more responsive to people with complex needs as well as considerable gifts from a wealth of lived experience.

Anna Chaplaincy is named after the 84-year-old widow Anna who appears with Simeon in Luke’s gospel- both inspiring role models of faithful older people. It is a gracious Christian offering from a local church to its community and is for people of strong, little, or no faith at all.

A recent survey* showed Anna Chaplains are meeting people of all faiths and none – 47% of those served were not church members.

How did it begin?

Anna Chaplaincy started in a market town, Alton, in Hampshire more than a decade ago – a joint Anglican/Methodist initiative – and has spread across the UK. A former broadcaster and lay minister, I was the first such chaplain and have pioneered the approach since joining BRF, Bible Reading Fellowship, in 2014 to develop it nationally.

There are now about 170 Anna Chaplains from many different denominations working in towns, cities, suburbs as well as in rural areas. Our core team runs online training courses, bespoke training days and residential courses in person.

Teaching is based on the Anna Chaplaincy Handbook: 25 chapters of distilled expertise on how to meet the spiritual needs of older; talking with people about the story of their life, their biographical pain as well as their joys; addressing spiritual issues sensitively which might involve forgiveness, grief and loss. The manual also covers topics such as the spirituality of dementia, working inter-generationally, and vital practical aspects of supervision and safeguarding.

Men as well as women can be Anna Chaplains. They may be lay or ordained. Some are paid but the majority are voluntary. All are skilled listeners who can help accompany people finding life hard in their later years, as well as be a voice for some who might feel they are becoming invisible as they age.

Anna Chaplains are companions on the journey, with advice to offer on the art of ageing well. They help open eyes to new possibilities, to the opportunities for a deepening spiritual life and gaining fresh perspectives.

They become a friend to someone who is lonely; a key link for the bereaved, someone who is isolated, and feeling alone. They signpost what help is on offer in any given context, for example for a partner caring for someone living with dementia.

It is worth stressing that Anna Chaplains are also there to draw alongside carers, relatives, and paid professional carers. If you are looking after a loved one living with dementia, for instance, you need special support. The chaplaincy is not just about working with people in older age groups either. Every person in need of support is someone’s mum, dad, grandmother, grandfather, or other relative or friend.

For example, Anna Chaplain Sue Yeo, from St Martin’s Church in Maidstone, offers spiritual care to residents in care homes in the parish.  When the pandemic prevented her visiting in person she began recording services and delivering them on DVD.  For Mothering Sunday she invited local primary school children to produce artwork and poems on the theme of spring, a time of hope.  The children’s work was sent in with the DVD and displayed in the care homes for residents to enjoy, bringing the outside world in.  She commented, ‘Some of the children have a grandparent in a nursing or residential home, and I am sure being able to express their emotions in their poetry was important to them.’

From the outset we were convinced Anna Chaplains (typically offering a day or two a week of their time) could be just as effective in rural, or inner-city settings, as in a small market town. That has proved to be the case, Anna Chaplains – often with volunteers working alongside them for a few hours a week known as Anna Friends – are now in villages, in seaside resorts as well as more urban environments. 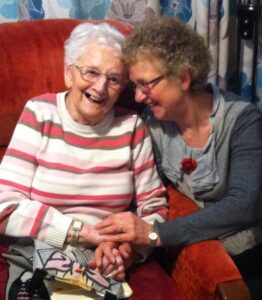 Part of the national coalition, Christians Together Against Loneliness https://www.ctal.uk/ Anna Chaplaincy is a timely response to our rapidly ageing population and their needs, many of whom describe themselves as lonely:

2.2 million of those aged 75 and over live alone. (Office for National Statistics)

More than 1.4 million older people say they are often lonely, that number is projected to rise to 2 million by 2025/26. (All the Lonely People – Loneliness in Later Life, Age UK 2018, drawing from data collected by the English Longitudinal Study of Ageing).

Shirley is involved with a CAMEO (Come and Meet Each Other) group for older people in the village.  During lockdowns they both made weekly phone calls to many older people who lived alone and risked being isolated during lockdown.  Sarah became friendly with an older woman who had only recently moved to Weald when Covid-19 struck.  It was a joy when they were finally able to meet in person on the village green, as restrictions eased.  With a team from her church, Shirley arranged for goodie bags to be delivered to the homes of older people, with cream teas and other delights!

In recent months, older Anna Chaplains have led the way back into certain care homes. Pam Shaw in Lowestoft, Suffolk, at the age of 82, dons full PPE each week and takes up position in a care home lounge where one after another as many as a dozen residents may be brought in to speak with her confidentially each week.

Getting the network together

As well as regular online get-togethers and specialist sessions on key aspects of the ministry such as prayer, care home worship and the variation on Messy Church that is specially for older people – Messy Vintage –

( https://www.annachaplaincy.org.uk/messy-vintage ) the Anna Chaplaincy network meets each autumn. The annual Gathering has taken place online rather than in person in recent times as the pandemic forced so much communication to switch from face-to-face to online. Meeting in this way is of great support to the network members who may be in far-flung parts of the UK some distance from each other.

‘It’s good fun for colleagues to meet in this way and the decibel level can be very high at times!’ says Julia Burton-Jones, Anna Chaplaincy’s Church Lead, and who has been responsible for helping build Anna Chaplaincy into the DNA of Rochester and Canterbury Dioceses and its vocational training.

With growing numbers of Anna Chaplains and their equivalents across Britain, our network members value the support of meeting the team at BRF. Over a day and a half there is much catching up on progress made, sharing of good ideas, learning through workshops and enjoyment of the fellowship of being able to worship together. The Gathering is an opportunity to make new friends, to reflect on the challenges in common, and be refreshed for more ministry.

It is counter-cultural work being an Anna Chaplain – someone who celebrates old age in a society which often tends to overlook and denigrate people of advanced years. Anna Chaplains are hope-bearers in a society which emphasises autonomy, and values youth, beauty, and productivity so highly. It is like planting a flag in the middle of town and saying: ‘older people matter.’

Retired Anglican bishop, Christopher Herbert, who has been a key supporter since its inception, says ‘the care of older people is part of the heart-purpose of God. For churches to be involved in this form of ministry is to share in the healing love which Christ has for our hurting communities.’

We yearn to see the approach taken up in Scotland as enthusiastically, and as determinedly, as it has been elsewhere.

Join us for a Faith in Older People and Anna Chaplaincy webinar – on Tuesday September 28 at 2.30pm. We will give an overview of the aims of the Anna Chaplaincy, with Debbie Thrower and the team, drawing together all sorts of people and groups who have expressed an interest in Scotland to highlight opportunities and plan the ways forward.