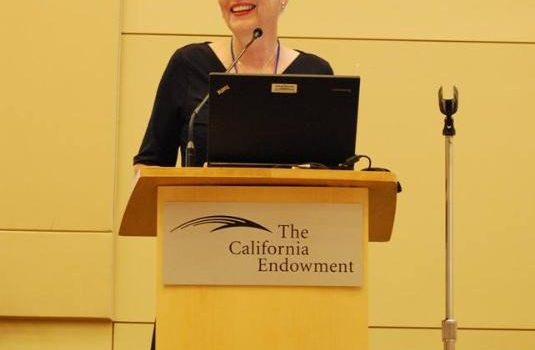 I recently attended this conference which I found inspiring and affirming.  It was a wonderful opportunity to follow up the previous conference which FiOP organised with Methodist Homes and the Centre for Theology and Public Issues, Edinburgh University.  The conference, held over four days, was rich and varied and the participants were very friendly and committed to spiritual care and older people bringing a variety of perspectives from different countries.

The following is a reflection from Professor Susan McFadden who we were privileged to have as our Malcolm Goldsmith Lecturer in 2013.  I hope you get a flavour of our discussions and activities. 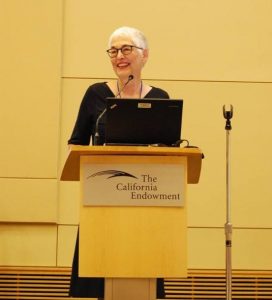 Most of us have attended many conferences, but as the years pass, I think we will recall the gathering in Los Angeles in October of 2015 as formative and transformative.  Personally, I feel deeply grateful for time spent with dear long-time friends and people I met for the first time here, all of whom I hope to remain connected to through the coming years.  A small conference like this affords such a rare opportunity for meaningful learning and the renewal and formation of relationships that can profoundly affect our lives.

As Keith Albans said in our first plenary session, talking about spirituality brings something enlarging and enriching to our consideration of aging.  A theme resounding throughout the conference first appeared in Keith’s address:  consideration of spirituality and aging points us to powers and strengths that can flourish in the context of biological aging which, as many speakers noted, is primarily a portrait of loss and decline toward death.

However, despite the narcissistic insults and painful burdens of biological aging, so many older adults’ lives are animated by creative engagement with the world that enables them not just to cope, but to flourish and find meaning and purpose that motivates them to keep going in the face of multiple challenges.  We saw that quite clearly in Liz MacKinlay’s talk about the work of Viktor Frankl and his influence on the leadership Mel Kimble provided to the effort to move religiousness and spirituality onto the agenda of gerontology.

It has been only in the last few years that gerontology has begun to pay attention to the resilience of older adults and to observe that for many people it is undergirded by spiritual practices and religious beliefs.  Unfortunately, however, as we saw in several of the presentations, faith communities often fail to see this.  As Keith Albans said, faith communities may not notice the “unspectacular discipleship” of older people that is a clear reflection of their resilience.

Nevertheless, when we look closely, and listen carefully, we begin to appreciate the narratives-the stories-expressing late life resilience.  Jane Thibault’s tales of pilgrimage, and the way she constructed the dynamics of the transformations that accompany pilgrimage, clearly demonstrated this to us.

When we reflect on this conference and its meanings to us-personal meanings, and relational meanings-I hope that we will frame it in terms of the way the conference was titled:  Paradox and Promise in the Pilgrimage of Aging.  I don’t think the organizing committee intentionally set out to be so alliterative, but these are three powerful words:  paradox, promise, and pilgrimage.  As Jane said, seeing aging as a pilgrimage invites us to embrace all the experiences of the journey:  the ones full of hopeful promise as well as the ones that force us to engage with the paradoxes of gain and loss, frailty and strength, love of life and readiness for death.  As Liz MacKinlay reminded us with a quote from Frankl, it is the “defiant power of the human spirit” that enables us to set out on this pilgrimage, endure its hardships, and embrace the hope and promise of its outcome.

Rebecca Giselbrecht’s translation and presentation of Ralph Kunz’s paper gave us more images of paradox and promise, arguing that both become clearer as we age.  Put most starkly, this paper stated that aging forces us to place the promise of maturity in the shadow of mortality.  How can we flourish in the face of all this, especially given our tremendous anxiety about dementia?  Our Swiss friends suggested that we need to be suspicious of any promises about aging that ignore paradox, and that we need a spiritual context for grasping that at the core of our finite, fragile existence, something whole shines through.

There is light shining through the darkness.

Dayle Friedman gave us many images of light and darkness when she spoke of how old age invariably presents us with shattering experiences:  experiences of loss, change, disillusionment, and frailty.  But, out of the shattering there can be redemptive repair and rebirth.  I don’t know if any of you noted that both Dayle and Jane employed the metaphor of shattering.  Jane told her own personal story of shattering, but paradoxically, pointed toward wholeness obtained through the meaning derived from, as she said, dignifying the shock, sinking so as to rise.  Here again is the paradox:  promise arises from peril.

Mary Catherine Bateson reinforced the power of metaphor in our efforts to live and grow together.  Her master metaphor-about composing a life-fits well with our theme, for after the shattering, after the peril, we receive the gift of composing our lives which, as Mary Catherine said, is a deeply spiritual process, infused with wonder and light.

Pulling all of this together, we can see a number of themes woven into our plenary sessions, workshops, and the conversations we had with one another.  We best apprehend the complexities of aging through story and the use of metaphors that help us grasp the promises and paradoxes of the pilgrimage.  Some of the most powerful metaphors surging through our time together have been expressions of shattering and light emerging from darkness.

Now I want evoke a concrete image I hope you take from this conference:  music!  I’ve been to many conferences, but never have I participated in one in which two musicians were appointed as bards to lead us in singing.  Music has been a key component of our time together.  In addition to the musical gifts bestowed by Bob Atchley and Judith-Kate Friedman, remember how Keith sang a song at the very beginning of our time together when the technology was balky?  Do you remember how Judith-Kate led us in the Wendell Berry song that begins, “And when I rise”?  When was the last time you sang so much at a conference?

Finally, I’d like to quote from a song we didn’t sing, but I think it expresses our themes of shattering and light.  It comes from Leonard Cohen’s “Anthem.”

Ring the bells that still can ring
Forget your perfect offering
There is a crack in everything
That’s how the light gets in.

I want to express thanks and gratitude for all the hours and effort and creativity Conference Host and Director Nancy Gordon dedicated to organizing this amazing experience we’ve all shared.  Thank you, Nancy!